And… Swimmer’s Tail Didn’t Slow Mighty Down…. Much 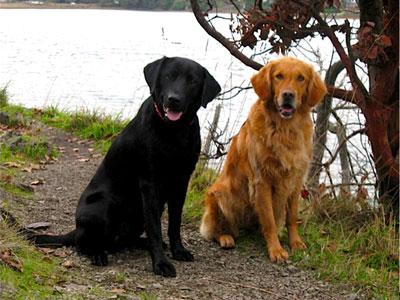 On Friday we visited Piper’s Lagoon, which is where this picture was taken. Both dogs decided to go for a dip in the ocean. Unfortunately Mighty got a bad case of Cold Tail/Swimmers Tail, which can be quite painful. He was still in good spirits over the weekend and was able to sit, but could not do so straight, and sometimes had to adjust after he sat. Fortunately Raisin’s tail did not have the same outcome as Mighty’s!

What is Swimmer’s Tail?

Limber tail, cold water tail, or swimmer’s tail, is an excruciatingly painful condition that seems to affect swimming breeds of dogs such as Labrador or Golden Retrievers. Usually the day after they have been  swimming, their tails are extremely painful, usually at the base of the tail. They will react painfully if you attempt to lift their tail, or touch them near the tail base. Often they will carry their tail tucked.

Somehow these dogs managed to strain or pull the muscles at the base of their tails. The treatment is pain medication in the form of NSAIDs (nonsteroidal anti-inflammatory drugs) such as Rimadyl and Metacam.

OTCH Raisin spent the last two weekends of March with me in Washington competing at obedience trials. Super pleased to [...]

Raisin earns an invite to the inaugural AKC Obedience Classic

Raisin earned an invite to the Masters class "Congratulations, your dog has met the eligibility requirements to enter the inaugural [...]

Another Perfect 200 Score for Janice & Raisin

On April 12th at the Northwest Retriever Club Trial in Washington State, Raisin WON the all-breed Qualifying Stake. She is [...]

And... Swimmer's Tail Didn't Slow Mighty Down.... Much Mighty, Raisin and Janice ventured to Nanaimo this weekend to compete in [...]

TNT's Run Raisin is announcing she is a new MASTER HUNTER. After a 2.5 year layoff from field due to [...]

More Hits for the Golden Girls

Janice's golden girls Billie and Raisin continued their winning ways at the Victoria Obedience Trials picking up a High in [...]